Last week, we had a professional development day at my school, and one of the topics we talked about was classroom design in the service of increasing self-regulation.  During our discussion, someone said, "It would be really great if we all went into each other's classrooms and told one thing we liked and one thing we didn't like about each other's spaces."  Though I didn't say anything at the time, that suggestion really stuck with me.

I have come to realise that all of the changes I have made in my classroom have been made with very specific reasons.  For example:
When people tell me they like my class, I just kind of nod.  When people tell me they don't like something about my class, I just kind of nod. As I have said many times, the classroom environment is, should be, and must be in synch with the teacher's teaching style, philosophy, and personality.  The classroom is such a personal reflection of the teacher.

Have I given advice to teachers about classroom design? Sure, lots, but that was after a discussion of what they wanted and who they were, or even better after getting a chance to see them in action, in that room, with students in it.  Plus, they asked for my advice because they were starting the process of rethinking their learning spaces.
Posted by Gooomanji at 8:37 AM No comments: Links to this post

What happened to my bike?
I used to ride my bike all the time then two things happened: one, I moved to a house on a big hill, and two, mortality set in.

Okay, people I know laugh at me when I mention the hill because it is not that big, but if they really knew me, they'd know that though the hill may not be big, my ego certainly is, just as my will to physically exert myself is small.  The hill provided enough of an impediment from me hopping on my bike and pedalling into the sunset.  So for over ten years, my bike sat in the shed collecting rust and dust.

What happened to my body?
But a few years ago, even more mortality set in and when I looked down, and -- oh man!  What is that!  A paunch.  Someone put a paunch under my shirt where a scrawny, but flat stomach used to be!  I had to face the sad truth: this old body needed to get out and moving again.

What to do?
I tried running, and only stuck with it for a while because it was boring torture: torture because my body does not like going up an incline (remember the hill?) so trails and the roadways around here are out, and boring because the track though soft and flat, was really tedious.  I felt like I was in a lab experiment on the track.  (Do I get my cheese now?)

Skipping?  Between my "50 year-old Asian shoulder" syndrome (supposedly a real thing, look it up; apparently our warranty runs out) and my lack of coordination, skipping was out.  Besides, I gave up skipping when I gave up pigtails and jacks.

My family and I really like cross-country skiing, but I don't think I can do enough of it to keep myself fit year round.

Back on the bike?  Research says...
The bike seemed like the next step, but what to do about the hill?  It was hard enough to talk myself into going out and exercising, but it was impossible to gear myself up enough to want to end my run with a longish uphill.  That was a no go on the bike.

Possibly, part of the problem with my protruding paunch is technology.  As my waistline has increased so too has the number of electronic and sedentary gadgets I have amassed: iPod, smart phone, tablet, and even cable (and PVR) on my TV. So what is the logical thing to do when confronted by such a seductive and sloth-inducing enemy?  Succumb!

I used all of my electronic resources to help me to investigate solutions to my exercise problem.  I gathered all of my devices, their screens like adoring faces glowing up at me, on the couch and Googled away.   How do I use my first love, my bike, to help me with my exercise, but still mitigate getting up the evil hill?  To solve my problem with my get up and go, I lustily sat, nay, lay with all of my "research tools" for hours.   I came up with a few solutions:

1. Move.  Too expensive and my family would miss me.
2. Walk my bike up hill.  Too shameful and not really inspiring me to exercise.
3.  Electric bike.

e-bikes
#3 was the answer to all of my problems.  I could pedal around on flats and down hills on my own power, and then when it was time to come home, flick on the pedal-assisted power and scoot up the hill like nuthin.  Yes!  My love for technology and my need for exercise interfacing in a beautiful seamless union.  Perfect.

So back on the couch and computer to further research my next exercise purchase.  e-bikes are very popular in Europe and Asia. My friend Pat's 80 year-old aunt used one on a bike and barge tour all across the Netherlands.  The sweet lady even sent me a couple of catalogues from Europe.  I watched YouTube videos of e-bikes cruising up and down the roads to local ski hills.

But if e-bikes are so great, why haven't they caught on?  For the same reasons I never ended up getting one:
-cost.  Decent e-bikes are thousands of dollars.  I could justify the expense if I used the bike as a constant alternate mode of transportation, but with my family and what I need for work, it is not practical to have an e-bike in my rainy environment.  I also would not feel safe enough leaving such an expensive bike locked in front of a store or the library.
-unreliability of used e-bikes.  Used e-bikes are much cheaper, but the batteries, which run hundreds of dollars, are unpredictable on a used e-bike.
-weight, the e-bike's not mine.  Between the batteries and hardware, e-bikes are heavy.  So if the battery ever died during a ride, I would be stuck on a really heavy bike, which would be like going up a long hill, all the time.

So what did I do?
I bought a really nice, but new affordable (non-electric) human-powered hybrid bike.  By hybrid, instead of meaning alternate-fueled, the bike is a cross between a skinny tire road bike and knobby tire mountain bike.  It is nice and light, and is geared really low, so getting up that hill, though still a chore, is manageable.  And when I am feeling really uninspired by the hill, I bought myself a little rack, so I can throw my bike on the back of my car, park, and ride on the non-ego-crushing flatlands.

New Love?
I still might get an e-bike, but until those main problems are fixed, I will watch from the sidelines.  I still check the internet for more info on e-bikes, and on a recent visit to an e-bike site, I found a "cooler" mode of transportation... 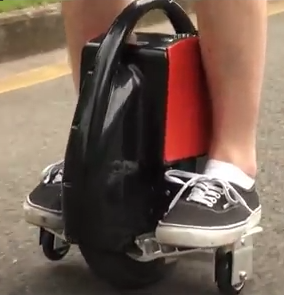 ... a self-balancing electric unicycle!  At speeds of 18km/hr, and a range of 20 km, this could be a viable option for getting me around the neighbourhood or to school and back.  With a weight of 10 kg, I could put it in the cupboard or under my desk.

The unicycle looks like a lot of fun, but it does not really solve my exercise problem, and I think Johnny Hart may have invented this transportation a long time ago:

What does this have to do with classroom design?
Not much, really.  This post though is a sad example of how design has to fit reality and that reality is based on the needs at the time.  I need to exercise, but the dread of it prevents me from doing so. (Cue: "A Spoonful of Sugar Makes the Medicine Go Down.)  This post does speak to making something necessary (e.g. education) as comfortable and accessible as possible by using design structures that enhance and support learning, instead of the reality: making learning cumbersome, dreary, and obstacle-ridden.  I'm not saying that classrooms have to be slick or fancy, but like the wheel, classrooms could stand to be improved upon to at least match their purpose: thinking, inspiration, and wonder.  Learning.
Posted by Gooomanji at 1:35 PM No comments: Links to this post

I needed a better projector stand.  The ones I had previously rolled too much which sent the image out of alignment all the time, or were too high so my students did not have good sight lines.  I tasked my grade 2 students with coming up with a suitable design.  They worked on the plans on a sheet that had views from the front, side, top, and a slanted angle. 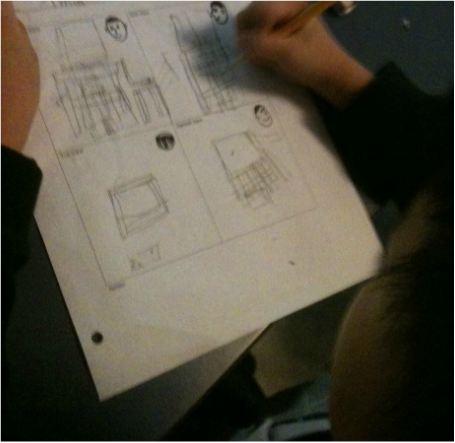 The "finished" product turned out great, and I will keep making changes to the stand to suit our needs.  (I have since moved the printer closer to my laptop).  For materials, I used leftover pieces I had in my garage.  I used slats from a bed for the uprights and cut a cupboard door for the flat white parts. 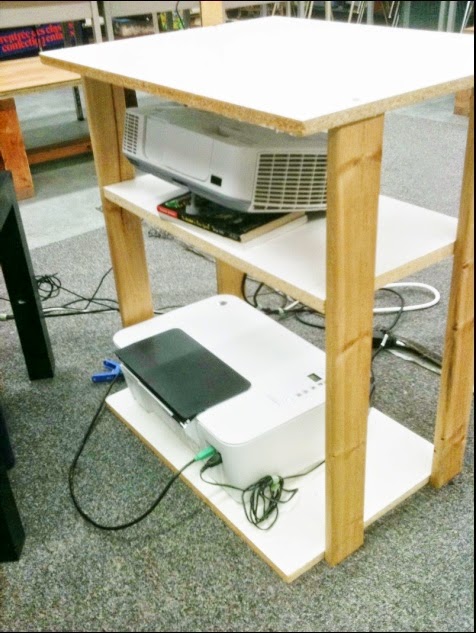 I took the best ideas from all the students' designs (well, ones I could actually do --- the "hovering" stand is currently beyond my skill set), and came up with a clean, open design.  The stand is stable so it doesn't jiggle, but is easy to slide out of the way when necessary.  It allowed for cords and ventilation.  The projector height is perfect for getting a good image that everyone can see.  The design is also flexible, and has allowed for some modifications, and you know how I love mods! 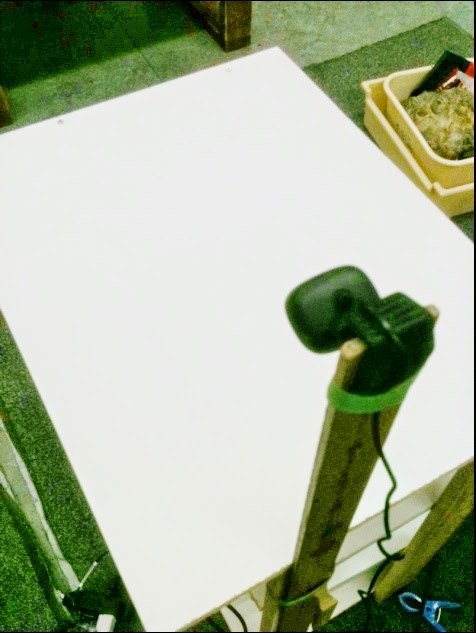 The big surface on top turned out to be a good place for a doc camera (above left).  We used a fixed-focus web cam that hooks up to the laptop by USB.  (I used to use an auto focus camera that was sharper but had the annoying habit of going in and out of focus, especially in low light).

Now we can project student work (or anything else) on the board so everyone can see it (above right).  See how the diagram projects on the big board and the laptop as well.  We can use whiteboard pens to draw and write on the image to interact with it.

I will probably fiddle with it some more.  That is, until I find a different design project.


Posted by Gooomanji at 12:07 PM No comments: Links to this post